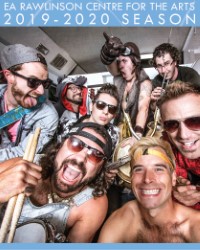 × From their first jams in Vancouver, B.C., drummer Tayo Branston and guitarist Gabe Boothroyd gathered a community of musicians who shared their love for James Brown, Tower Of Power and other groove-driven players. Now called Five Alarm Funk - with Eli Bennett on sax, Oliver Gibson on guitar, Tom Towers on congas, Carl Julig on timbales, Kent Wallace on trumpet, Jay Smith on bass, and Jens Christiansen on sax added to the lineup - the band bristles with fiery rhythms, punchy horns and gang-chant vocals that have ignited fans across Canada, down into the U.S., and as far away as Taiwan. In the wake of their most recent album, Sweat, they’re now deep into a project that involves adding all-star guest vocals onto some of the more volatile tracks from their catalog; beginning with a Bootsy Collins appearance, and more all-stars to come.