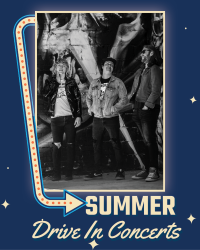 × W3APONS is a Canadian Rock trio from Saskatoon, SK. The band’s debut single “Oﬀ the Top of My Heart” reached #11 on the Canadian Active Rock Charts completely independently in 2019, and has received over 700,000 streams on Spotify. This pattern would continue for the band’s next three releases, all of which independently went Top 30 in Canada, including their ﬁrst Top 10 “Bye Baby Gone”. W3APONS’s independent charting successes and relentless touring in 2019 resulted in them being handpicked by Theory of a Deadman to accompany Theory for all 21 Canadian dates of their Say Nothing 2020 World Tour. Drummer/vocalist Tallus Scott, bassist/vocalist Myk Ulan-Hohol, and guitarist/vocalist Jordan Welbourne are the elements in the perfect storm that is W3APONS - Energetic, Hard-hitting, and unmistakably Rock & Roll.

W3APONS has shared the stage with Theory of a Deadman, The Trews, Monster Truck, Sweeney Todd, The Lazys and The Wild.