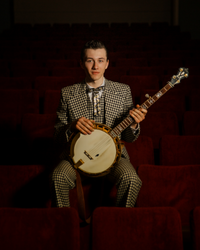 Jake Vaadeland is a self taught multi-instrumentalist and songwriter from Saskatchewan, Canada. His traditional sound and unique style could be defined as a blend of Bluegrass and 50s Rockabilly, with Jake also specializing on guitar and banjo in addition to his impressive vocals. Jake strives to write and play with a focus on storytelling and messages that he hopes his audience can relate to, all packaged in foot stomping, high energy performances with The Sturgeon River Boys.