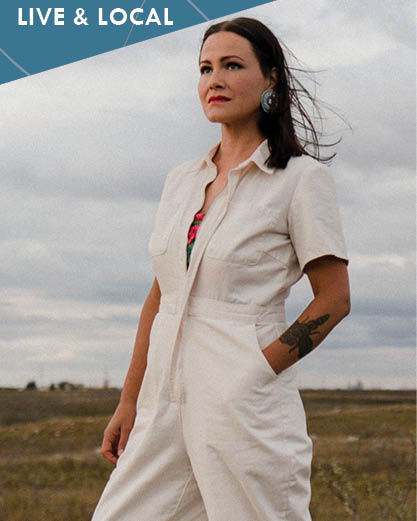 × Eekwol (Lindsay Knight) is an award-winning hip hop performing artist in Saskatoon, Treaty Six Territory, originally from Muskoday First Nation. Eekwol has been making music for many years.  Her 5th full-length album titled, Good Kill was released in 2017 and the single,”Pitiful feat. 2oolman” made it to the #1 spot on the National Aboriginal Music Countdown and charted in Sirius Radio and numerous college and community stations and streaming site playlists. For 2019, she successfully received a Canada Council grant and completed a concept project with fellow lyricist T-Rhyme titled For Women By Women. ​ Eekwol uses her music and words to spread messages of resistance, revolution and keeping the language, land and culture alive for the next generations. Through her original sound she displays her activist roots by living and creating as a supporter of both Hip Hop and Indigenous culture and rights. She is currently working towards her PhD Degree at University of Saskatchewan, which she has taken along with her many years of dedication to hip hop and created something unique and astounding to give back to the community. Along with motherhood, music and academic work, Eekwol frequently works with young people across the country as a mentor and helper. She achieves this through performances, workshops, speaking events, conferences and programs.